New Zealand is increasingly a country with multiple cultural identities and values.

But will we continue getting more diverse in the future given COVID-19 breaks on immigration?

There are now 213 ethnic groups in the country, with an increasing number of people identifying with multiple ethnicities, particularly in the younger population.  Urban centres are more ethnically diverse (particularly for new migrants) and rural areas tend to have older populations.

In the most recent 2018 Census data, New Zealand continued to become less populated with people of European descent, and more people of Asian, Māori and Pacific origins.

On current projections (assuming that COVID-19 recedes and these longer-term trends continue), fifty-one percent of New Zealanders will be Asian, Māori or Pasifika by 2038 (New Zealand Recreation Association 2018).

Statistics NZ has developed a new infographic which gives a useful illustration of how New Zealand looks today. Immigration has fundamentally changed what it means to be a New Zealander.  As at September 2019, 27% of New Zealanders (or nearly 1.3 million people) were born overseas (Statistics NZ 2019).  This has increased from 25.2 percent back in 2013.

Will NZ keep getting more diverse in future?

Until the start of 2020, it looked like New Zealand's trend towards increased diversity was inexorable.  But with COVID-19, the rates of immigration have slowed dramatically.  What will happen to immigration in future?

The changes in the ethnic makeup of Auckland will continue to be significantly different from the rest of New Zealand, with major growth anticipated in Asian populations in Auckland and a relative higher increase in European and Maori populations anticipated outside of Auckland."

Prior to COVID-19, Statistics NZ had been predicting the continuation of long-standing trends towards more ethnic diversity.

While several vaccines for COVID-19 have been developed, at the time of writing, global vaccination campaigns are only just getting underway.

Even if these campaigns are ultimately successful, it is likely that vaccinating the entire world will take a long time.

Furthermore, the cost of air travel will likely remain high for some time and people will remain concerned about new variants of the virus.

In this context, it is too early to say if and when migration rates may return to pre-COVID-19 levels.

Ethnic diversity may actually reduce the need for SAR

While ethnic diversity in New Zealand has increased significantly over the last decade, participation in the outdoors has not.

In the vast majority of outdoor recreation pursuits, NZ Europeans still tend to participate more than people from other ethnic groups.  The couple of notable exceptions are hunting and fishing, where Māori rates of participation are higher. 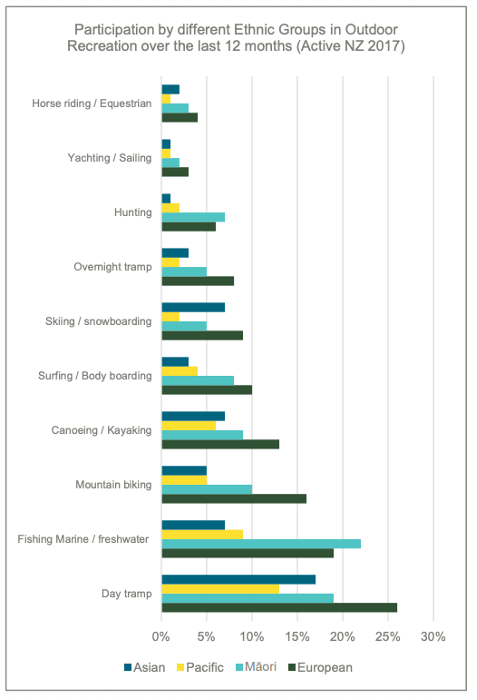 Recent Ministry of Health research data has also suggested that Asian and Pacific people are less likely to be physically active than their non-Asian counterparts[i].

Further research by the University of Otago suggests that migrants in particular tend to have lower participation in recreation (and particularly the outdoor variety) than NZ-born people[ii]. This finding has also been reinforced by Active New Zealand Survey findings.[iii]

It remains to be seen whether efforts to increase participation in sport and recreation including outdoors, like ActiveAsian, will remove these discrepancies.  But if the proportion of Asians to NZ Europeans increase by around 10% to 2031 as projected earlier, we can expect the number of people spending time outdoors to drop a little.

It is important to remember though that the proportion of people requiring SAR is much smaller than the overall population of people spending time outdoors, so this downward pressure on demand for SAR services is likely to be modest, and probably offset by other environmental drivers (e.g. increased ‘wandering’) which increase demand over time.

One explanation for the different outdoor participation rates is that different ethnic groups face different constraints and community-defined priorities around time use.  For example, research from the NZ Recreation Association found:

“Asian migrants wanting to access outdoor recreation, identified cost, time, transport and ‘nobody to go with’ as the constraints. They value the social opportunities of spending time with family, socialising and creating contacts.” (New Zealand Recreation Association 2018)

The meaning of participating outdoors can be very different for people from different ethnic backgrounds.  For example,

For Māori, mountaineering can be perceived as an insult to the oldest ancestors, the mountains, and Māori people are more likely to go hunting or fishing in the outdoors – a purposeful activity.  NZ Pacific Islanders may gather food and do other family-related activities, but the cost of outdoor activities, and a recent history of working in hard physical jobs may be part of the reasons that Pacific Island peoples rarely tramp/hike (New Zealand Recreation Association 2018).

Not only do NZ Europeans participate more in the outdoors, but they also get into trouble outdoors more often.  NZ Europeans are disproportionately more likely to be involved in a search or rescue (79%) and to be injured (83%) or killed (73%) while outdoors (Mountain Safety Council 2016). By contrast, people identifying as from a Pacific Island, Asian or Māori were all relatively less likely to require a SAR operation.