Population growth itself is not likely to be a big contributor to demand in future years and nor is the distribution of the population. So what does impact on demand when it comes to population changes?

New Zealand has had consistent and gradual population growth over recent years - however ,the only reason for this was because net migration has been positive.  In short, our population growth has depended entirely on there are more people entering the country than leaving or dying.

Of course, this means our population change has been driven primarily by immigration.  As the graph below illustrates, the number of people arriving consistently outstripped those leaving the country between 2013 and 2019. 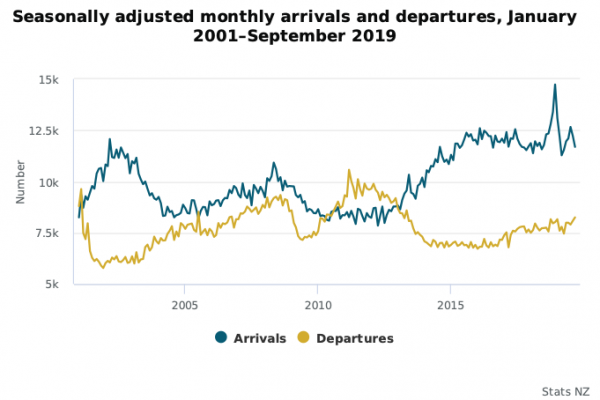 This may seem like a lot, but when compared internationally, New Zealand’s average population growth sits pretty firmly in the middle of the pack as illustrated below.

Looking ahead, even without COVID-19, New Zealand's population growth was forecast to gradually decline.  Current projections suggest that the annual growth rate will peak in 2020 at 0.94% before gradually decreasing toward 0.34% in 2050.

With growth rates this small, even given the further population suppression effects of COVID-19 in the medium term, it is unlikely that New Zealand will see large changes in their numbers.

The Impact of Population Growth on SAR demand

Further, if anything, COVID-19 is likely to reinforce the slow downward trend in population growth, meaning it is unlikely to be significant contributor to increased SAR demand in the medium to longer term.

Instead, SAR demand growth will relate more directly to the actions of those participating in (primarily recreation) activities on land, in the water and in the air.

In 2015, 74% of adults (2.5 million people) took part in sport and recreation in any given week.  Of these, walking, cycling, jogging and swimming were most popular.[i]

However, 91.3% of these were undertaken in man-made facilities, the most popular being paths, walkways or cycleways in cities or towns.[ii]

This means only 9.7% of activities were outside of such facilities (and logically more open to the need for SAR). This is probably a key reason why demand for SAR is so low relative to the overall population.

[i] Sport NZ. Sport and Active Recreation in the lives of New Zealand Adults. Retrieved October 3, 2017, from http://www.sportnz.org.nz/assets/Uploads/attachments/managing-sport/research/Sport-and-Active-Recreation-in-the-lives-of-New-Zealand-Adults.pdf

Does where people live matter for SAR?

In reality, changes in the regional distribution of population are probably more relevant to the question of where to source future SAR volunteers than to that of what will drive future demand for search and rescue.  This is because people do not just participate in outdoor recreation near where they live.

Recent work by the Mountain Safety Council has highlighted this point.  By exploring where ‘hotspots’ for injuries and fatalities occur around New Zealand, it has been able to start clarifying the links between where and how people participate in the outdoors, and demand for land-based search and rescue.

The Mountain Safety Council has found that:

- that 22% of all tramping search and rescue events were on a Saturday and occurred in the central north island (Mountain Safety Council 2018).

They also found that key South Island tramping destinations such as Tasman, Westland and Southland experienced much higher fatality rates than their usual resident populations would suggest.

This is perhaps not very surprising given that these are all major tourist destinations.