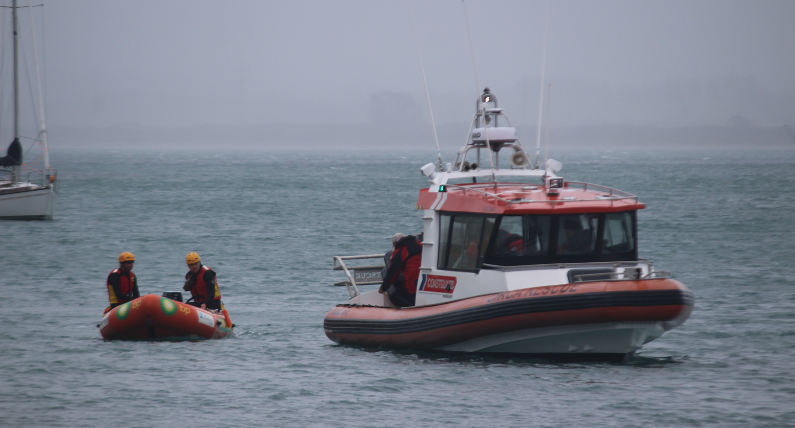 The following scenarios are based on the Marine IMTEX section of our START training programme. These scenarios can be used in training sessions for operational SAR agencies.

A personal locator beacon has been set off on a rocky shoreline in a remote area. The Rescue Coordination Centre has called up the beacon's emergency contacts and established that two men were surfcasting off the rocks. There is no cellphone coverage on the shoreline but there is some coverage at the top of the cliffs nearby.

The local rescue helicopter is unavailable as it is undergoing maintenance. The next closest air asset is on another job and won't be available for at least four hours, so RCCNZ have handed coordination of the incident to Police. The weather is currently fine, but heavy showers and gusty winds are expected in 4-5 hours' time. The sea state is calm to moderate, but the forecast is for potentially heavy swells ahead of an approching weather system tomorrow.

Things to consider:
- what would your initial actions be?
- which local resources could you utilise to assist with the search?
- how will you manage the safety of the people involved?
- what information on the missing people could you request from their next of kin?
- what is your plan for when the weather changes?

Scenario B: Two men in a dingy

A fisherman has called 111 as he has seen two heavy-set men fall out of their dingy in the middle of a river mouth estuary. The area has a reputation for strong tidal flows, and the nearby bar is considered dangerous and unpredictable. The river mouth is not generally used to launch sea-going vessels due to the close proximity of the bar.

Both men are wearing wetsuits but only one has a lifejacket on. There is a steady offshore breeze gusting to 8 knots and the tide is going out. The men's family members have gathered on the opposite side of the estuary and are becoming distressed.

Things to consider:
- what would your initial actions be?
- what is your plan for managing the tidal flow and the nearby bar?
- what local resources could you call on to assist with the search?
- how will you manage the safety of the people involved?

Back to News
Need to report someone lost or missing? call 111 - Ask for police